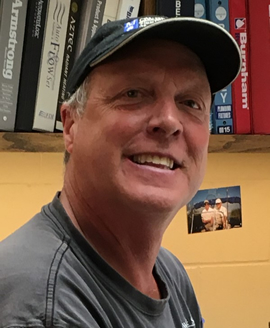 Wayne Burbach attended the North Dakota State College of Science in Wahpeton, ND after his high school graduation. He majored in plumbing/heating & cooling. Upon graduation from NDSCS, he began his plumbing/pipefitting career at Happ’s Plumbing & Heating in Minot, ND. He has been a member of the UA Local 300 Plumbers and Pipefitters since 1979. Wayne became a registered Journeyman in 1982. He continued his plumbing/pipefitting career with Mowbray & Son Inc on September 2, 1984. He was originally hired to work for just a few weeks, which turned into months and then turned into years. He has worked as a Journeyman, Foreman, and is currently the company’s Plumber/Pipefitter Superintendent. Wayne is energetic and driven. He is licensed in the state of ND as a Journeyman Plumber and is med-gas certified. His years of experience make him extremely valuable leading plumbing/pipefitting crews on various projects. Wayne can juggle several things at once and works with his crews to stay on task. He is highly respected by fellow staff, customers, other contractors, and vendors.